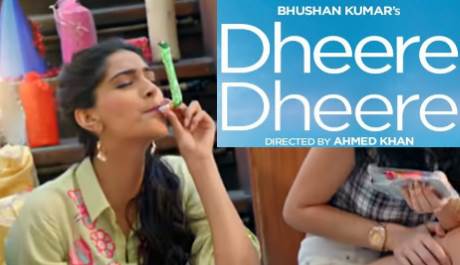 Sonam Kappor
Dheere Dheere is a song by the Indian recording artist Yo Yo Honey Singh. He recorded this song on his iPhone and composed it on his laptop during his Bipolar Disorder. The track was released on August 31, 2015 as a single on Hotstar. It is a cover version of the Bollywood filmi-ghazal song "Dheere Dheere Se" by Nadeem–Shravan, from the 1990 all-time blockbuster Bollywood film soundtrack album Aashiqui. It was released on YouTube by T-Series on September 1, 2015.

Yo Yo Honey Singh hit the Hindi music industry like a storm and caught everyone by surprise with his new brand of compositions. He studied music at the Trinity School in the United Kingdom and soon became a Bhangra music producer. He has also produced music for many Bollywood films and has become one of the highest-paid music producers in Bollywood today.